With takeovers like the AstraZeneca – Pfizer bid much in the news, Bob Bischof joins a panel of industry experts for the BBC World Service programme ‘In the Balance’ to discuss foreign takeovers and the national interest. 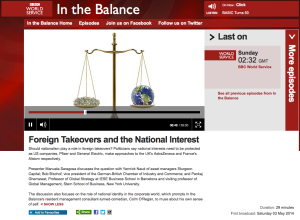 With takeovers like the AstraZeneca – Pfizer bid much in the news, Bob Bischof joins a panel of other business experts for the BBC World Service programme  ‘In the Balance‘ to discuss foreign takeovers and the national interest.

You can listen to the half-hour programme here: http://www.bbc.co.uk/programmes/p01y0sb9

This letter appeared recently in the Times and is republished here:

“Instead of accepting the CEO’s whining about high taxes and too much regulation, the Prime Minister could have interrogated them at the Times CEO Summit about their abysmal performance in world markets. As we heard, Britain has been exporting more to Ireland with 4.5 million people than to the BRICS countries (Brazil, Russia, india, China and South Africa), with nearer 4 billion people. German companies have to cope with far more regulation and carry substantially higher payroll costs, but have managed to reduce unit labour cost by more than 20 per cent in the last decade and raise productivity. Moreover, Germany was until 2009 the largest exporter in the world.
Britain, on the other hand, had a more than 20 per cent devaluation of sterling but British exporters have not taken advantage with higher sales volumes. Mr Cameron is right to try to turn bad regulation into useful regulation, but he should look at taxing profits which stay in companies and are re-investe in markets and products differently from those that are paid in dividends and share buy-backs.
In the absence of credit-induced consumption and state spending to drive the economy, growth depends to a large degree on our companies’ performance over the coming years. One precondition is to increase the skill base. Here again, should the Government beg companies to engage in its ambitious apprenticeship programme or should there be a training levy, against which companies can reclaim some of the cost of training? Either way, feeding companies carrots does not seem to work: more stick might work better.”