This is an extract of an article published on January 13th 2013. It can be read in full on the Daily Mail website here. 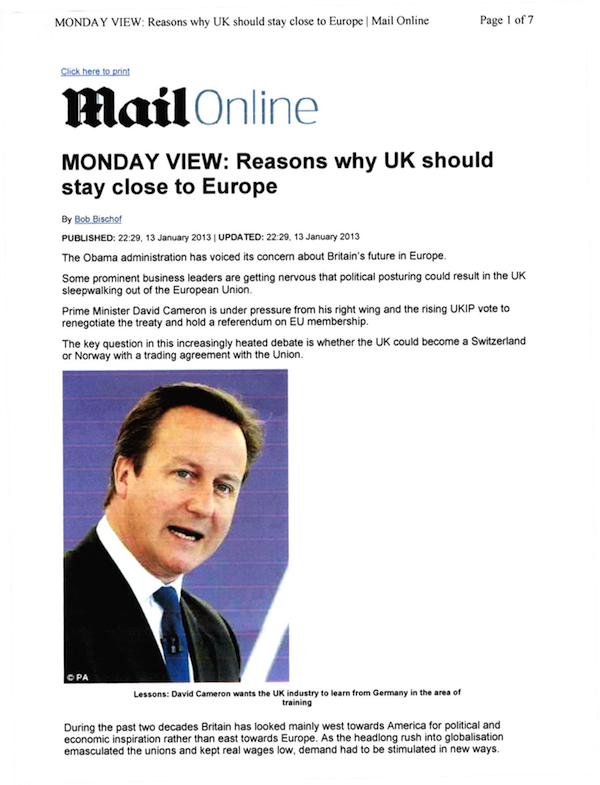 The Obama administration has voiced its concern about Britain’s future in Europe. Some prominent business leaders are getting nervous that political posturing could result in the UK sleepwalking out of the European Union. Prime Minister David Cameron is under pressure from his right wing and the rising UKIP vote to renegotiate the treaty and hold a referendum on EU membership.

The key question in this increasingly heated debate is whether the UK could become a Switzerland or Norway with a trading agreement with the Union.

During the past two decades Britain has looked mainly west towards America for political and economic inspiration rather than east towards Europe. As the headlong rush into globalisation emasculated the unions and kept real wages low, demand had to be stimulated in new ways.

Following the US example, wage increases were replaced by increased limits on credit cards and rising mortgages on the back of the asset bubble.

When Margaret Thatcher came to office in 1979, private household debt stood at around £60billion. When Labour got into office in 1997 it had risen to £750billion and when the Coalition took over, it had reached £1.45trillion.

Instead of government debt being reduced during the boom years, the opposite happened, with the rescue of the banking sector completing the disaster.

Taking the lead from the US in economic strategy has been an unmitigated disaster not only for Britain, but left other countries such as Ireland, Spain, Portugal and Greece. It even influenced such countries as Switzerland, France and Germany, as their banks were trying to become global players, pay their managers Wall Street salaries and adopt the casino culture.

Fortunately, in the northern European countries the excesses were not quite as pronounced, but they now have the unenviable task of bailing out their profligate southern neighbours. Following the US lead during the past decade has not been a great success and no wonder open-minded people all over Europe are looking for alternatives.

A lot of my German business colleagues regret, as I do, that Germany and Britain did not get together as leaders of Europe, as Helmut Schmidt and other German chancellors had hoped.

Britain is approaching the crossroads and my hope is that leaders will look at the alternatives carefully and not be influenced by political expediency.